Isolation comes in many forms. Social, physical, forced and voluntary, self-imposed and peer-imposed, recommended, prescribed, demanded. Isolated within the city, from the city, within one’s home, within four walls. Isolated but related, isolated and disconnected.

I have never been in a minimum-security prison but recently I had to self-isolate for a fortnight after returning to Toronto from the United States. When friends asked me how I was after those weeks of quarantine, I said that it felt like moving from solitary confinement to a minimum-security prison. I was joking, but now I am not sure that this could be received as a joke. Since returning, I’ve heard again and again from people that living in lockdown feels like being in prison.

Friends sometimes say to me that this new way of being reminds them of my years in prison and the research I’ve been doing on imprisonment and solitary confinement. I’ve smiled every time, until the other day when walking with a friend she looked into my face and demanded an answer.

And we are walking up and down our local streets. People are out, not in groups, and not much side by side, but alone, or two by two, or one or two parents with their children. We are talking about our virtual connection with family, friends and associates in Montreal, in the United States, in Europe and Asia. We report on the new hobbies and skills we have taken up. We can remain in our rooms and be in touch with the entire world, even without the internet – just a radio and an old-fashioned phone breaks the isolation.

How, then, can this self-isolation be like imprisonment? What is it about this new experience that makes people think of prison? Of course, there is prohibition on freedom to move, to act, to be in public space in the usual ways, to interact and get together with others. Isn’t it the same thing, the freedom that imprisonment aims to take away from ‘wrong-doers’?
Yes and no.

In this self-sort-of-isolation you and I are active participants. You and I have our ideas, we have demanded measures to protect ourselves, to protect our vulnerable bodies. You and I have the agency to hold the authorities accountable for the forms and extent of this prohibition. In that way we have not lost our place in the public space. So long as this prohibition has not become an authoritarian decree backed by state violence, we are still citizens of our countries, and by virtue of that citizens of the world.

But a prisoner is not just stripped of freedom to move, interact and communicate. A prisoner’s very being as a citizen, as a full participant in her own affairs and those of the world at large, is negated. Not that she does not have any agency, nor that she is stripped of her voice. No. The prisoner has voice and agency. It is the society, the free people, that turn their backs on the prisoner, make their eyes and ears blind and deaf.

This is one aspect of the way a prison system works: we isolate them.

There is a huge difference between deciding to stay away from other people and being forced into a corner away from people. They are not of the same order. As I think about this, I realise that this practice of self-restraint on our freedom can actually lay the basis for new types of empowerment and solidarity. Now we can relate more intimately to the stranger who moves to the middle of the street as we pass each other.

Such avoidance is not a sign of rejection but of respect; it is giving room. Of course, the fear for the self is always lurking there. But again, that fear is in everyone. And finally, now that it has come to the surface, for everyone and everywhere, we can recognize this fear without shame, without denial, the ever-present ancient fear for-the-self. At the same time, we are experiencing feeling for the others, even for prisoners.

Constrained to our neighborhoods and homes, we find in ourselves an ability to imagine the intimate experience of people across the world.

When was the last time we collectively stayed conscious for this long about the effects of our actions on other people, on our capacity to make them to suffer?

Can we give that proper recognition as well? Recognizing the presence of another ancient feeling, our care for others? In these recognitions are the seeds of our empowerment and a global solidarity.

Forced isolation, imprisonment, is a move in the opposite direction. Forced isolation thrives on exaggerated fear-for-the self; it disempowers prisoners by smothering them in their ancient fear for their isolated selves; it works by breaking the possibility of solidarity. Does that need more elaboration? I assume not.

At the end of our brisk walk my friend and I look at each other, standing a few feet apart and sending air kisses. Our departure was as incorporeal as our arrival. Arriving at the rendezvous, we opened our arms from a distance; our greetings fell on the ground between us and with their echo we began our walk.

And at the end both of us automatically wrapped our arms around our separate bodies and rocked for just a few seconds. This is like being in prison, visits without bodily contact, with no ability to embrace your loved ones, breath them in, smell them, feel their reality through caresses. Have you ever before felt that, the deprivation of embracing your grandchildren, your vulnerable siblings, parents, your friends? Deprived of giving and receiving a body-to-body assurance, especially at a time and place of uncertainty and danger.

A month ago, I said goodbye to my parents and brothers, flying back to Toronto. This came at the end of week when our hugs had become hesitant. For most of the two months I had spent with them we had all settled in our daily hello and goodbye rituals of embracing. Each in his and her time, allowed his or her body to welcome the hug, to arrive into it and hug back.

Then when the air of uncertainty was spreading around the world, bringing fear of a threat lurking inconspicuously to leach onto the most vulnerable ones, my hugs lost their firmness. My body had to let go of their bodies, my hands and my lips had to hold back their desire to land a kiss, to caress their vulnerability. We all did it; we all hesitated and gradually allowed this sensory deprivation.

We all participate in our decision and our action of holding our bodies away. We all experience its complexities, its tensions. It is a deprivation, it leaves a strange taste in its trace, but in some ways it is comforting. It is for that comfort, that sense of mutual protection, that each of us partakes in the decision and practice of holding our bodies back. This is not like prison.

In prison there is no complexity nor inner tension in experiencing sensory deprivation. This is what prison is, deprivation in multiple layers and degrees.

Prisoners do not decide for or against their corporeally deprived state. A prisoner is the recipient of it.

Year after year, I stood there behind thick dividing glass, watching my parents and my child entering and exiting the visiting hall. Sending air kisses, caressing and pressing on the indifferent glass. Not that you don’t get used to it. You adjust; you accept it if you don’t want to lose your strength, but the deprivation remains deep in your tissues and the tissues of your loved ones.

Twice I saw my parents outside the visiting room. Once during a visit, I told them that I would be taken out to a hospital on such and such date and with gestures I asked them to be there too. Arriving at the hospital my escort directed me towards the Orthopedic waiting area. We were all incognito. The two female guards on other side of me wore no sign on their clothes to distinguish them from ordinary people, neither did I. The male guards easily fitted in among other young men in their various military fatigues; they walked ahead and behind us. I looked at people’s faces, their bodies, their trailing children, I picked up their voices while we passed by them, and searched for familiar faces.

Then I saw them in the waiting area, walking down the hall towards me. They saw me. The shock in their faces gave way to happiness which quickly changed into anxiety. Seeing me and trying not to look at me. I still see their faces walking down that corridor. My dad holding onto my mom’s shoulder as together they veered towards the right. The guards chose the empty chairs on the left side and we sat with me in the middle. My parents sat a few chairs down from us on the other side of the hall. We looked at each other. Now what?

Now sitting a few steps away from each other, four at most. We could get up and embrace each other, holding tight till the world’s end, and we could not move at all. I do not know what showed on my face. But in theirs I could see the struggle they were going through. Colour slowly came back to their faces. I smiled faintly, moving my head looking up and down the hallway. It is hard to sit and do nothing. My mother’s tears fell; the woman beside her said something to her and I could see my mother was telling her what was going on. The woman shook her head a couple of times and looked towards me.

That was the extent of our agency; we decided to be in each other’s presence outside of prison, in a ‘normal’ setting. We accepted the risk and acted on our plan.

It was different than seeing them within the prison walls, through the glass. I saw them as free people, sort of, walking and sitting among the others. Feeling, living the tension of being at arm’s length with an abyss between us: this was our own decision and action. We chose to be in each other’s presence in a public space, but the distance between our bodies was the work of imprisonment.

Shokoufeh Sakhi is an independent scholar and researcher, researching imprisonment and the self, the sociality of the isolated subject and the politics of memory. 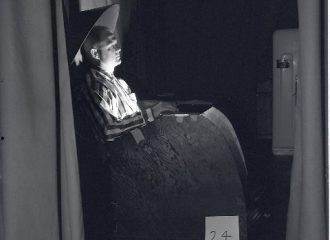